Motorhome in the Algarve 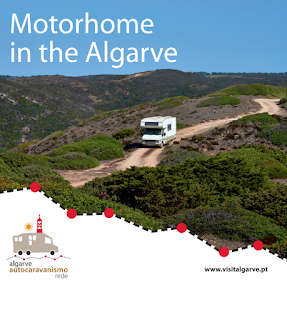 The projects stems from a cooperation agreement between the Algarve Regional Development and Coordination Commission (CCDR Algarve), the Algarve Tourism Board (Região de Turismo do Algarve), the Algarve Tourism Associaton (ATA) and the Algarve Inter-municipal Community (AMAL).Formally established in January 2015, the network includes Camping and caravan sites, Rural camping and caravan sites and Motorhome Service Areas. Its main goal is to promote legal accommodations to stop and spend the night in the setting quality, comfort and safety which motorhome travellers demand.

As part of regional strategy for welcoming motorhome travelers and defined in accordance with good principles of land planning and respect for environmental values, the Network may also include other units that meet the necessary criteria and which help improve the tourist offer in the region.


Source. Turismo do Algarve
Posted by VisitPortugal at 13:08 No comments: Links to this post 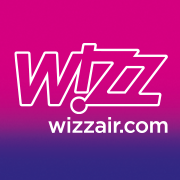 Wizz Air, the largest low-cost airline in Central and Eastern Europe, announced a new route from Warsaw to Porto, Portugal. The new service will commence on 15 May and operate with two weekly flights, on Wednesdays and Sundays.
Located in Northern Portugal, Porto is one of the oldest and most charismatic cities in Europe. It is renowned for its romantic atmosphere, beautiful architecture and picturesque historic centre, which is a UNESCO World Heritage Site. Porto is a new destination in Wizz Air’s network of 119 airports.
With its newest Portugal service, Wizz Air now offers a total of 123 routes to 22 countries from Poland. Seats on the new route are already on sale and can be booked on wizzair.com

Gabor Vasarhelyi, Communications Manager at Wizz Air said: ”We are delighted to add another attractive route to the ever growing WIZZ network. Porto is now the second Portuguese destination available on our low fares from Warsaw and we are confident that it will be as popular among our customers as Lisbon is. Seats on our new Poland route to the charming city of Porto are already on sale on wizzair.com. Our friendly Polish crew looks forward to welcoming you on board with a smile!”
Wizz Air was recently named 2016 Value Airline of the Year by the editors ofAir Transport World, one of the leading airline trade magazines.
Source:  Wizz Air
Posted by VisitPortugal at 11:23 No comments: Links to this post

The Airline Danish Air Transport  started lasted 29th of January a new air charter operation from Billund, Denmark, to Porto Santo. This is a seasonal operation and will last up to April 29th 2016.

This connection to Denmark is an absolute premiere at Porto Santo Airport adding to a second weekly connection to Copenhagen, starting at February 11th up to 21st of April 2016.

With these connections, we estimate an increase of more than 3 thousand disembarked passengers at Porto Santo Airport.

As usual, to mark this new operation, Porto Santo Airport prepared a reception for the arriving passengers, offering Madeira wine and flowers.

Source: ©ANA Aeroportos de Portugal, SA
Posted by VisitPortugal at 10:53 No comments: Links to this post

Portugal is a land of romance. Something intangible hangs in the air that will seduce and enrapture you. 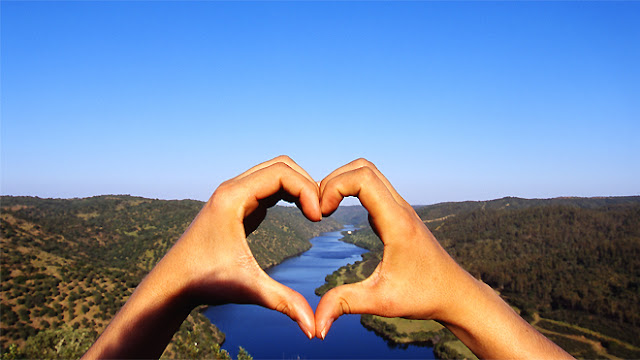 No-one can resist the charm of a medieval castle adapted to modern times, where you can indulge in the comforts of living. Or a spa, a memorable meal, an endless stretch of beach, a wine tasting, a cultural and leisure programme.

Close to Lisbon, Sintra, in Monte da Lua, is a destination that never disappoints. The 19th-century palaces and mansion houses in the romantic setting of the world heritage landscape of the Serra de Sintra are ideal places to celebrate a special occasion. You can count on quality service and there are specific programmes.

Close to Porto, the force and temperament of the River Douro are a hallmark of a powerful landscape, a reflection of the passion of those who live in the world's oldest demarcated wine-producing region. The port wine produced and aged here is bound to be your top choice to toast this new stage in your lives. We suggest staying at one of the estates in the Douro Valley, for a more intimate and attentive ambiance. Or you could go for a cruise along the river, lasting several days, which would give you the opportunity to visit the riverside villages and explore a region that is also world heritage.

The combination of luxury, history and nature is highly appreciated as a way of marking a special date and in this respect Portugal has much to delight visitors with a refined taste. The Pousadas de Portugal chain gives you the opportunity to spend the night in such places as castles, palaces and charm hotels, including, for example, Óbidos, a small, walled town, informally known as Vila das Rainhas (Town of the Queens). Other magical and inspiring places include the Mata do Buçaco (Buçaco Woods) and Quinta das Lágrimas (Estate of Tears), in Coimbra. And there is also the Parque Termal de Vidago (Vidago Thermal Spa), in the north of Portugal, whose palace is internationally famed as being one of the best places to get married.

For those seeking an idyllic scenario in which to enjoy romantic evenings and dinners to the sound of the sea, there is the Estoril Coast. This resort, which once provided refuge to kings and princes, and still retains the charm of yesteryear, may be a good option. In southern Portugal, the Algarve coast, with its golden cliffs and hidden beaches, is sure to please.

On the Island of Madeira, the year-round pleasant climate and the variety of parks and gardens give you the perfect opportunity to enjoy nature at its best in a refined and sophisticated setting, whether your preference is for a hotel with a sea view or the tranquil ambience of an old estate. A sunset boat trip or a mini-cruise to Porto Santo are also ideal ways to fire your passion.
s
No-one can resist the charm of a mediaeval castle adapted to modern times, where you can indulge in the comforts of living. Or a spa, a memorable meal, an endless stretch of beach, a wine tasting, a cultural and leisure programme.

Discover some of the most romantic and inspiring places in Portugal.
Posted by VisitPortugal at 10:40 No comments: Links to this post

Want to win a trip to Portugal and meet the big wave legend Garrett McNamara? 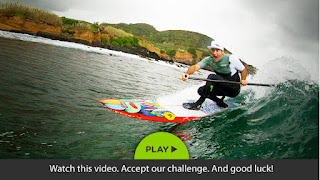 21 Days, 7 Regions, 2 Archipelagos and one of a kind Surf Trip

Join Garrett McNamara and his crew in this trip around Portugal to discover some of the best waves around the country.
Watch the documentary, answer correctly to the question in our website and win a trip to Portugal to meet in person the surf legend Garrett McNamara.

The prize will be drawn among the participants who correctly answer the question. You have until 29 february to participate.

What are you waiting for? Fill in your details now and enter the draw!
Posted by VisitPortugal at 12:27 No comments: Links to this post

A train ride through the almonds in blossom: Watch spring burst into bloom again in 2016 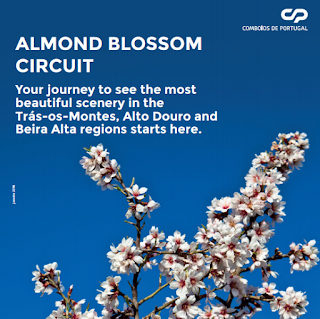 Get aboard the train for a memorable journey along the Almond Blossom Circuit, where you can let your senses delight in the vast flower-filled landscape of one of Portugal’s most green and verdant regions. The oldest tourist excursion developed by the Portuguese railway company CP (Comboios de Portugal), the Almond Blossom circuit takes you through some unique countryside, where history and tradition blend perfectly with the beauty of the landscapes. A journey that will literally take your breath away. Taking you through the region of Alto Douro and Trás-os-Montes in special trains, along the line from Porto-Campanhã to Pocinho and back, the Almond Blossom Trail is further complemented by a choice of three road trips that you can also choose from. 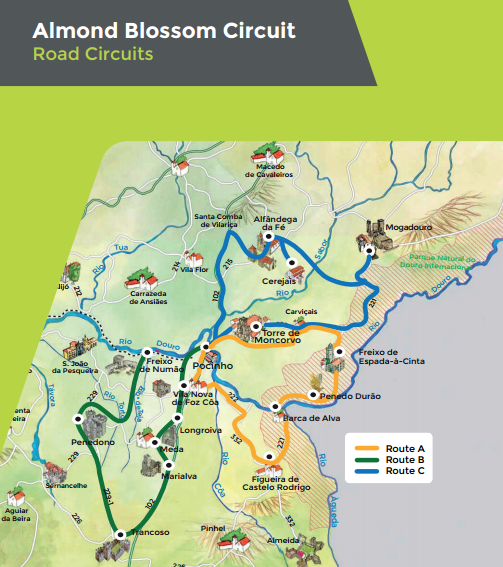 Dates: These trips are going to be held on the Saturdays 27 February, 05, 12 and 19 March and on Sunday 13 March 2016.
Visit the CP website to find out the train times and any other information you may require.
Posted by VisitPortugal at 14:57 No comments: Links to this post

Lisboa: A must-see destination in 2016 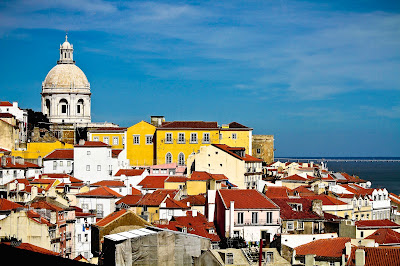 Lisboa was considered one of 50 destinations not to be missed in 2016 by Minube, a travel advisor site which has already helped more than 1.6 million tourists and travellers discover all kinds of destinations around the world.

Among other cities, Lisbon appears as one of the select group of destinations which should not be excluded from our travel plans for 2016. They are cities which, according to the site, “are places you must see in your lifetime, not be missed in any circumstances, and which everyone should explore one day”.

The city of Lisbon also came fourth in the ranking of ten worldwide destinations which should not be missed in 2016, chosen by Condé Nast Traveller magazine, being described as one of the most dynamic cities in Europe.

The travel magazine calls the Portuguese capital a destination where it’s always sunny and beautiful beside the sea, with “hip” areas such as Bairro Alto and Príncipe Real and its flourishing arts and creative scenes, for which reason more and more young creatives are choosing to live here, drawn by the quality of life and low cost of living. For eating out, the magazine features the opening of José Avillez’ Mini Bar as well as Rua Cor-de-Rosa, Cais de Sodré for its nightlife.

Source: Lisboa Inside
Posted by VisitPortugal at 11:29 No comments: Links to this post 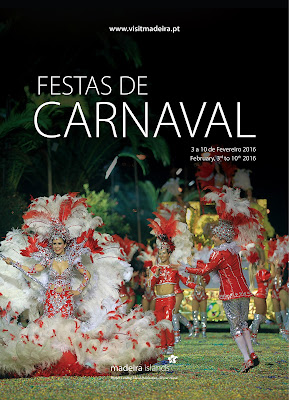 Carnival, one of the main tourism events of Madeira Island, will entertain for a week, the city centre of Funchal.

The city will dawn vibrating with good times to the sound of philharmonic bands, samba and Carnival marches.

The highlight of the festivities is scheduled for Saturday evening, the 6th of February, when the float parade will go through the streets of Funchal, displaying great creativity by the various joining troupes, in a colourful and lively spectacle, with a total of one thousand revellers.

To complement this festive period, on Shrove Tuesday afternoon, the 9th of February, the “Cortejo Trapalhão” will take place. This is the day when Funchal explodes to a great mood and where thousands of irreverent revellers from all over the region have scathing caricatures about regional, national and international figures, thrilling the witnessing crowd at the avenue, with popular irreverence.

Join us in this imaginative and exciting party, under the motto: "Madeira, dream Carnival"!

Find here more details about the Carnival in Madeira.

Posted by VisitPortugal at 15:51 No comments: Links to this post