Visit Oporto and take part in one of the biggest contemporary arts festivals, that offers activities for all ages and for the whole family.

The festivities aren’t confined to the premises of Serralves - they extend beyond the Foundation’s walls and inundate the streets of Oporto’s Baixa zone with street theatre, music and lively entertainment.
Don’t miss it!

Find more information at:
- http://www.serralves.pt/serralves-em-festa-2016
- https://www.visitportugal.com/
Posted by VisitPortugal at 16:38 No comments: Links to this post 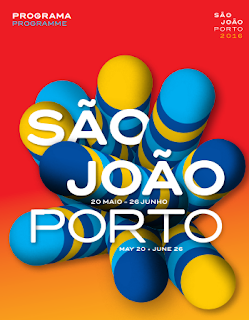 Celebrate the feasts of São João, the most revered saint of Porto, held on the night of 23rd June.

The feasts of São João, of pagan origin and associated with the celebration of the summer solstice, are marked by dancing, eating and fireworks.

From May 21st to June 26th, Porto will celebrate its “largest festivity”. One can expect six weeks of much entertainment, with initiatives all over the city that will target all generations of locals but also all of those who visit us this time of the year.

Despite the celebrations of São João reaching its peak on the evening of 23rd to 24th June, this festival has no longer been a one-night celebration for a long time and now it lasts six weeks with many other parties, from dance balls to street parades, runs and regattas, concerts, music and circus festivals, theatre, street entertainment, and also performative arts, contests, parades, ballons launching and many activities for children. There are so many innovations that the best you can do is take a look at this programme.

After all, you don’t want to miss anything of this great festivity called São João or all the city of Porto has to offer;)

Find more information at:
- http://www.visitporto.travel/
- https://www.visitportugal.com/São João
Posted by VisitPortugal at 16:23 No comments: Links to this post 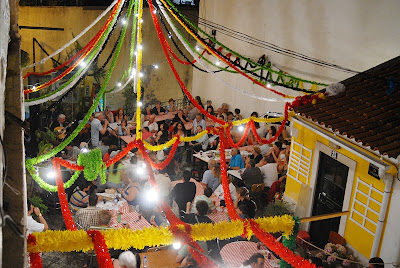 June is the month of celebrations and festivities for the Popular Saints throughout the country on the nights of St. Anthony, St. John and St. Peter.

The main ones are the Festas de Lisboa, on 12 and 13 June, St. Anthony’s day, and in Porto on the night of 23/24 June when St. John (São João) is celebrated. These are enormously vivid celebrations, during which the people take to the streets eating, drinking and having fun in the old neighbourhoods, that are bedecked with arches, colourful balloons and the aroma of sweet basil. 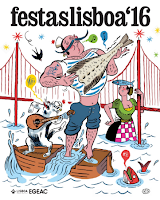 In Lisbon, people from every neighbourhood parade down Avenida da Liberdade, filling this major road with colourful characters in costume, folk music, and throngs of spectators. But the crowds and liveliness also fill the narrow back streets, particularly in Alfama, but also Graça, Bica, Mouraria and Madragoa. In the mediaeval squares and alleyways, people eat cabbage soup and grilled sardines, singing and dancing the whole night long. Another highlight is the procession of St. Anthony, which leaves on the 13th from the church of S. António in Alfama, near the Cathedral, where the saint was born in around 1193. 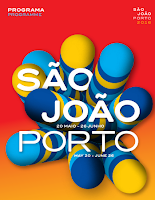 The festivities are just as colourful and lively in Porto, in the more traditional neighbourhoods that include Miragaia, Fontainhas, Ribeira, and Massarelos. But Porto has other habits and customs: the old tradition was for revellers to beat each other on the head with a leek, but now they use plastic hammers; and besides the firework display at midnight on the River Douro in the centre of Porto, people also release colourful hot air balloons into the sky, making one of the most beautiful spectacles in these popular celebrations. For many, the night ends on the beach, to see the sun rise, and some still follow the tradition of taking an early morning dip in the sea.

St. Peter (São Pedro) is celebrated on 29 June, also with popular festivals in various parts of the country, such as Sintra and Évora, both on the World Heritage list. Évora, incidentally, has the distinction of celebrating two popular saints, since it has held the St. John Fair since the 16th century, one of the largest in southern Portugal, as well as celebrating the feast of St. Peter as a municipal holiday.

In all these festivals, there is also the tradition of jumping the bonfire and offering your girlfriend or boyfriend pots of aromatic basil, containing four-line verses often speaking of love, especially because these feasts are linked to the summer solstice and ancient fertility rites. 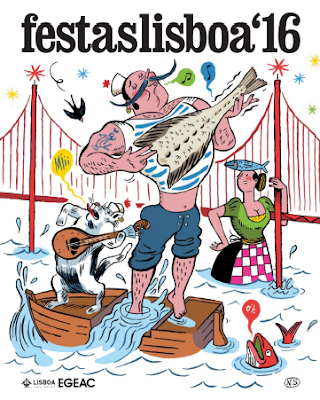 With a whiff of summer in the air, the Festivities of Lisbon offer a full program of entertainment activities that will invade Lisbon’s oldest neighborhoods, luring thousands of people into the streets.

Santo António, highly respected and worshiped in Lisbon and treated as a true patron of the city, sets the mood for the festivities that reach their high-point on the evening of June 12, with the parade of popular marches along Avenida da Liberdade. On the afternoon of June 13, a procession in homage to the popular Saint - who is believed to foster marriages - winds its way through the streets around the Sé cathedral and provides a special religious flavour to the festivities.

Evenings are animated by traditional festivities in Lisbon’s oldest neighborhoods - from Castelo to Mouraria, Graça, Alfama, Ajuda and the Bairro Alto - with lots of music and dance to the rhythm of popular songs. Decorated with coloured globes and garlands, the city’s streets are invaded by the smell of roasted sardines and sweet basil accompanied by paper carnations and paintings that allude to Santo António.

June is the main month of these festivities, but they also extend throughout the summer, including a wide variety of events such as fado, jazz and other musical performances, fado in the city’s trams, cinema and theater festivals, sports events and exhibitions.

Posted by VisitPortugal at 15:29 No comments: Links to this post

Lisbon welcomes yet another airline: Ural Airlines arrives from Moscow 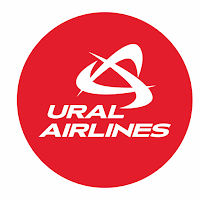 On 1 May, Lisbon Airport welcomed Ural Airlines, a Russian airline that will complement the direct connection between Lisbon and Moscow, until now exclusively operated by TAP Portugal. This diversification of options for passengers demonstrates the growing connectivity of Lisbon Airport.

To celebrate the arrival of this new airline, the passengers and crew on the inaugural flight were welcomed on their arrival at Lisbon with the traditional “baptism” given to the new aircraft by the firefighters at the airport and, at departure, they were presented with pastéis de nata, the Portuguese custard pastries enjoyed the world over.

For more information and reservations visit the airline's website www.uralairlines.com​


Source: ANA Aeroportos de Portugal S.A
Posted by VisitPortugal at 11:17 No comments: Links to this post

The Portuguese and Bulgarian capitals are now much closer with Bulgaria Air, which is starting direct flights between these two capital cities.

Sofia and Lisbon will now have a weekly direct flight, on Thursdays, arriving at Lisbon airport at 11:00 p.m. and leaving at 11:50 p.m.. The two historic European capitals will therefore become linked by a flight of less than four hours.

Yet another new airline and a new destination from Lisbon Airport, which has seen the connectivity and diversity of options for Portuguese passengers grow, and the influx of tourists to Portugal increase.

For more information and reservations visit the airline's website www.air.bg​


Source: ANA Aeroportos de Portugal S.A
Posted by VisitPortugal at 11:01 No comments: Links to this post 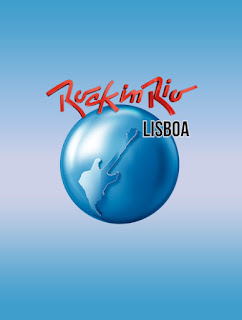 Rock in Rio-Lisbon will be back as one of 2016’s biggest events. Bela Vista Park in Lisbon will host one of the world’s biggest music and entertainment festival.

During a 5-day emotion-packed event, Bela Vista Park will be transformed into a veritable “city of rock”, including over 12 hours of performances per day on the various stages.

In addition to the concerts, families are invited to spend a pleasant day relaxing in the garden areas and enjoying the entertainment activities , including the “Radical Space” - where more adventurous festival-goers can go snowboarding on the real snow track - and the Kids Space offering many children’s activities.

Last May 6, Corendon Airlines opened a new route between Amsterdam and Madeira, reinforcing direct flights to the Dutch capital.
This Dutch airline has been flying since 2004, is part of the Corendon BV group, and is now one of the biggest tour operators in Holland and Belgium, connecting several destinations in Europe and North Africa, particularly Turkey, Germany and Holland.
This flight will run during the IATA summer, once a week, on Fridays, between May and October, using a Boeing 737,  with the capacity to carry 189 passengers.
Find more information at: http://www.corendonairlines.nl/

Posted by VisitPortugal at 14:01 No comments: Links to this post

From the 19th to the 22nd of May, don´t miss Portugal's Rally

Come and witness the great skill and expertise of the world’s top drivers, who will be racing along the roads and tracks of Portugal, competing in the Portugal's Rally.

The Portugal’s Rally is the fifth stage of the International Automobile Federation’s (FIA) World Rally Championship, and it is expected to be one of the most hotly disputed events of the season on the European continent.

Monarch Airlines has started flying from Manchester to Madeira Island.

The airline will offer two weekly frequencies, using an Airbus A321 with capacity for 214 passengers.

Monarch Airlines, founded in 1968, operates from several British airports to over 50 destinations worldwide, transporting over 8 million passengers a year.

The new Birmingham – Lisbon route begins on 17 June, but will only operate during the IATA Summer period.

According to the airline’s head of route development, Monarch clients' growing demand for Portuguese destinations has led the company to rethink their strategy for Portugal, and to decide to reinforce their routes to Portuguese airports.
The new flights to Madeira and the rest of Portugal are already available at
- www.monarch.co.uk


Posted by VisitPortugal at 11:35 No comments: Links to this post

Celebrate International Museum Day on the 18th of May 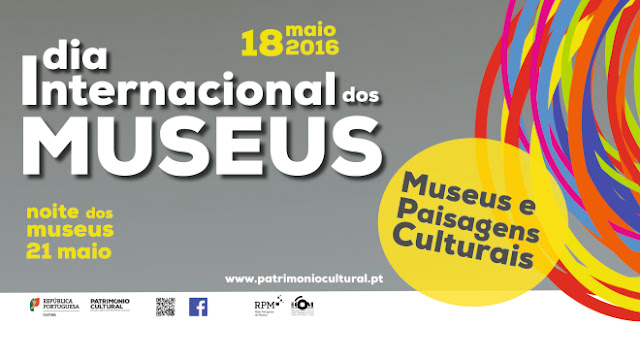 As happens every year, International Museum Day will be celebrated on the forthcoming 18th of May. The initiative is promoted by ICOM – the International Council of Museums.

In Portugal, museums will be marking the event by organising an array of initiatives and activities intended to let people see a different side of the museums they visit. This is an opportunity to visit areas of the museums that are normally open only to staff and to which access is restricted. Other activities include guided tours, workshops and ateliers for all ages.

The event also incorporates the European Museum Night initiative on the 21st of May. Many museums will be taking part by staying open later than usual so that visitors can see their collections at a time when the museums would normally have closed for the night. There will be a range of activities organised especially for the occasion.

Every year, International Museum Day is dedicated to a different theme. The theme for 2016 is Museums and Cultural Landscapes. It is hoped that this will encourage people to see museums as centres that actively help safeguard cultural landscapes, contributing to their conservation, enhancement and enrichment. This contribution can take a number of different forms, in particular through the interpretation of the heritage, places and landscapes in which the museums are located, as well as by passing on knowledge about these aspects to visitors.

Posted by VisitPortugal at 08:49 No comments: Links to this post