Between 24-28 of February, visit the Algarve and join in the Carnival celebrations!

The region has well rooted Carnival tradition, and various locations in the Algarve host lively carnival processions such as Loulé, which continues to organise one of the country’s largest Carnival parades.

Find more information at:
- http://www.visitalgarve.pt/Carnival
- Algarve
- Algarve  February Events Guide
Posted by VisitPortugal at 10:15 No comments: Links to this post 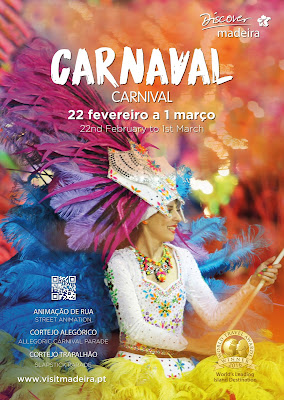 Carnival officially begins on the Friday before Lent and only ends on Shrove Tuesday, with the whole island being caught up in the intense and contagious liveliness.

The Carnival festival in Madeira is one of the region’s liveliest festivals. Funchal city wakes up on the Friday morning to the sound of brass bands and carnival parades bringing their good humour to the whole of the downtown area, which is then continued at night with concerts and shows in the Praça do Município for five consecutive days.

On Saturday night, it’s time for the great procession of floats to come out into the street. After following their traditional route through the city, they concentrate in the Praça do Município, where there is much singing and dancing in a magical atmosphere of music and merrymaking.

On the day of the Carnival itself (Shrove Tuesday), Funchal explodes in a great outpouring of merriment. In the afternoon, irreverent merrymakers from all over the world parade in front of the crowd who are in turn infected by this atmosphere of playful caricature - it is time for the popular parade. Throughout this period, the streets of Funchal are decorated with patterns of lights and inundated with background music alluding to the Carnival period. Let this contagion infect you, too!

If you like sacred music, don´t miss until the 1st of July “Terras sem Sombra” Festival in Alentejo

Come and enjoy the best of sacred music being played at some of the most beautiful monuments in the Baixo Alentejo, while delving into the region’s traditions and historical roots. 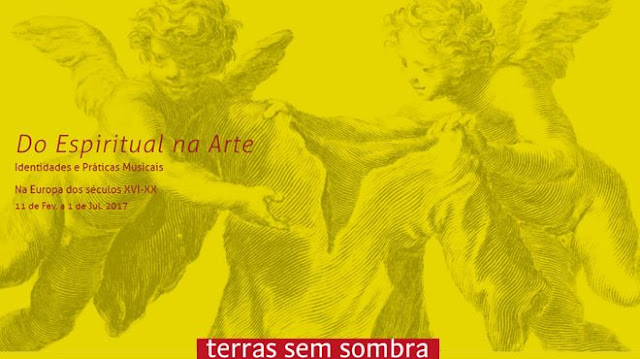 Besides providing a showcase for the talent of internationally recognised composers, musicians and performers, the “Terras sem Sombra” Festival is the most important sacred music festival in Portugal, and also offers visitors a chance to get to know some of the churches that form part of the Baixo Alentejo’s monumental heritage.

With music as its central theme, the festival also includes thematic lectures and conferences, guided tours, and activities designed to promote the arts and culture, as well as a series of parallel activities, such as nature conservation and the protection of biodiversity.

Find more information at:
- http://festivalterrassemsombra.org/
- https://www.facebook.com/terrassemsombra/
Posted by VisitPortugal at 16:06 No comments: Links to this post

Portugal is currently a hub for creativity and innovation and a gateway to the world.

Centuries of history and culture and a privileged location by the seaside make Portugal a very unique place where you can learn or work on your academic project.

Find more information at:
- https://www.study-research.pt/
Posted by VisitPortugal at 15:49 No comments: Links to this post

Congratulations to Porto👍! After a three weeks’ period of online voting, Porto was elected Best European Destination 2017 and won this prestigious title for the third time (2012, 2014, and know 2017).

"Never has the choice of the winning city been so unanimous among travellers from all other the world. It is with the votes of worldwide travellers from 174 countries that Porto wins this European title again. Travellers from the USA, the United Kingdom, France, Denmark, South-Africa, South Korea, Ireland and Canada, among others,... voted Porto in the first place in this competition.

Porto is exceptional in more ways than one and the "Cidade Invicta" (unvanquished city) is history, is architecture, culture, gastronomy, trade, encounters and discoveries, will seduce you.
Porto has all the charm of towns which happily cohabit with their river. You can stroll along the River Douro in Cais da Ribeira, fly over it by helicopter or discover Porto's architecture, its amazing landscapes and magnificent bridges by taking a cruise on this majestic river. Porto is also a sea city and in the briefest of time a tram will bring you to Foz do Douro’s gentle beaches face to face with the Atlantic.


Enter the sumptuously cool Palacio da Bolsa, and walk through history with Portuguese adventurers, follow the country’s trade routes and be stunned by the treasures which they brought back. Remarkable buildings such as the Sé Catédral and its terraces offer superb viewpoints over a bustle of markets, grocery stores, bars, restaurants…"

If you like Cycling, don´t miss from the 15th to the 19th February the 43rd Volta ao Algarve 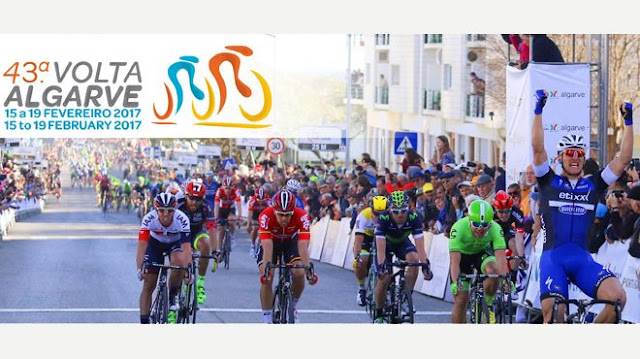 The 43rd Volta ao Algarve, that takes place from the 15th to the 19th February, is a race where some of the most important international stars of the sport will fight for glory on the roads of the south of Portugal and that will be lively broadcasted in 55 countries by Eurosport.
The Volta ao Algarve, which in 2017 was promoted to category 2.HC of International Cycling Union, will be contested by 12 UCI World Tour teams: Astana (CAZ), Bora-hansgrohe (GER), Cannondale-Drapac (EUA), Dimension Data (RSA), FDJ (FRA), Katusha-Alpecin (SUI), Lotto NL-Jumbo (NED), Lotto Soudal (BEL), Movistar (ESP), Quick-Step Floors (BEL), Team Sky (GBR) and Trek-Segafredo (EUA).
The 43rd Volta ao Algarve will be attended by 25 teams and the peloton can have 200 riders, the maximum allowed by the regulations. There will be many international stars including renowned classic specialists and time trialists such as John Degenkolb, Jasper Stuyven and Giacomo Nizzolo from Trek-Segafredo or Sep Vanmarcke, Taylor Phinney and Wouter Wippert from Cannondale Drapac.
The race will have five stages and cover a total of 772 kilometers. The first stage, 182,9 Km from Albufeira to Lagos is expected to be the first battle between the sprinters. The second stage will leave from Lagoa to arrive 189,3 km later at the top of Fóia, the highest point of Algarve, at 900 meters from the sea level. The climbers and the cyclists that want the final yellow jersey should be in the first places. The third stage is an individual time trial, 18 km around Sagres. The sprinters will have the second and last chance to shine on the fourth stage, 203,4 km from Almodôvar to Tavira. The race will end with 179,2 km from Loulé to the top of Malhão, a short but steeper climb. Arriving first counts as a second category mountain, and the race will be decided here.
With this competition, the Algarve will demonstrate its qualities as a tourist destination of excellence for cyclists, in all its various aspects. It is a region with great natural attractions and landscapes, offering cycling routes and great hotels, culture, heritage and gastronomy.
Find more information at:
- http://voltaaoalgarve.com/
- https://www.facebook.com/VoltaAlgarveOfficial/
- http://twitter.com/@VAlgarve2017

Posted by VisitPortugal at 11:11 No comments: Links to this post