Madeira Wine Rally: From the the 3rd to the 5th of August


The European Rally Championship is hosted in the spectacular landscapes of the island of Madeira in August.

The European Rally Championship is the oldest international competition organised by organised by FIA (the Fédération Internationale de l'Automobile), and includes 10 events in 10 European countries. The Madeira Wine rally is one of the most important events in the championship and is the region’s biggest automobile event, attracting thousands of spectators to mountainous areas in search of a better place to watch the vehicles as they thunder by.

The rally is named after one of the main products in Madeira, the liqueur wine that was already highly popular in European courts in the 18th century due to its unique aroma and flavor.

Until the 23rd of July, don´t miss the AgitÁgueda

Every year in July, the Agitágueda Festival brings a lot of colour and animation to this city in the heart of Portugal.

This event, held in the city center along the river, is world renowned for the originality of the Umbrella Sky Project, where over 3000 colorful umbrellas covered four of its main streets in an event of great visual impact.

In addition to this and other facilities that allow urban art to be their distinguishing feature, the AgitÁgueda program includes performances, concerts and many amazing initiatives that make of it a unique event.

Special flights connecting Portugal and Japan for the first time

Of the four scheduled flights, three will have their arrival and departure in Lisbon, and the fourth will arrive at Lisbon Airport and depart from Porto Airport. The first three flights will be carried out in Boeing 777-200 aircraft with 245 seats from JAL – Japan Airlines, and the fourth will be carried out by ANA – All Nippon Airlines in a Boeing 777-300ER with 264 seats. This will be the first time that both airlines operate commercially in the airports of Lisbon and Porto.

Despite being sporadic and short-lived, this charter operation takes on some relevance due to its experimental nature in a market as important as the Japanese. This is the first direct operation between Japan and Portugal, and its success will surely be a lever for other operators and airlines to consider the possibility of new direct operations in the future.

It should be noted, as an anecdote, that the first flight (on 15 July) connects the two biggest airports of the VINCI Airports network (Lisbon Airport and Kansai International Airport), and that this has been a project very closely followed by both airports as to ensure the success of this experimental operation.

VINCI Airports and JTB are already working to ensure the execution of an expanded version of this operation in the summer of 2018, already considering the possibility of the traffic not being solely inbound – Japan-Portugal, but also outbound – Portugal-Japan.

Source: Ana Aeroportos
Posted by VisitPortugal at 15:10 No comments: Links to this post 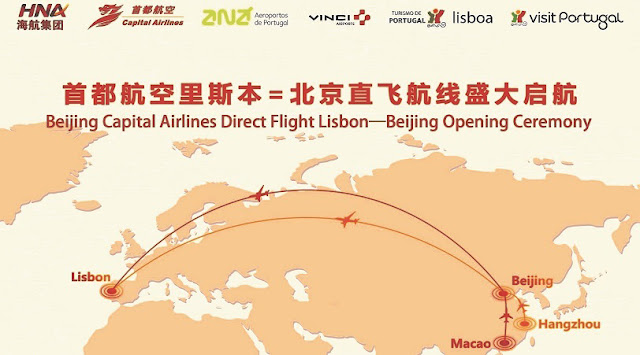 The new route, which begins on 26 July, will consist of a direct flight between Beijing and Lisbon. The flight, however, will originate in the city of Hangzhou, with a stopover in Beijing. At the same time, BCA will also inaugurate the Beijing – Macao route, thus increasing Lisbon Airport’s connection with China.

This connection, long desired by both countries, will start with three flights per week, on Tuesdays, Thursdays and Saturdays, until the end of the IATA summer, and will be flown using an A330-200, an aircraft with a seating capacity of 260. In the winter, there will be an additional flight on Sunday, increasing the frequency to four flights per week.

By the end of 2017, around 40,560 seats will have been made available. Over the next year, the operation is expected to maintain four flights per week, providing approximately 76,800 seats in 2018.

Beijing Capital Airlines has two major operational bases in Beijing and Hangzhou, with a network of 198 routes and carrying out 230 scheduled flights per day. It was established in 2010 and has now a fleet of 65 passenger aircraft, all from Airbus, namely A319 (24) and A320 (32). Last year it opened its first route to Europe: two flights per week with alternating departures from Beijing and Hangzhou to Copenhagen (Denmark). This year, it has already announced the launch of flights to Australia and to Canada, Helsinki (Finland) and Zagreb (Croatia).

Source: Ana Aeroportos de Portugal
Posted by VisitPortugal at 12:58 No comments: Links to this post

On the Azores challenge of the Sketch Tour Portugal, Alexandra, native Azorean, had the chance to show her own hometown to German artist Jenny Adam and see familiar places with new eyes.

Join us on this visual stroll through the beautiful and magic islands of São Miguel, Terceira and Pico and check some of the sketches Alexandra and Jenny have created during their trip:

Posted by VisitPortugal at 17:47 No comments: Links to this post

Portuguese Music Festivals: Follow the sound and rhythms in Portugal

Music, sun and sea, partying every night and 850 km of beaches: it is one of the best combinations in music festivals in Portugal. But there are other programs where the calm richness of sound blends perfectly with historical heritage or rural environments.

In addition to good music, festivals afford an opportunity to get to know these sites in an atmosphere of total relaxation and fun. Lisbon and Porto have been recognised year after year as perfect mini-break destinations and have very lively nights that are the natural continuation of the party atmosphere. In these two cities, the spotlight falls on NOS Alive and Super Bock, Super Rock, in Lisbon, and NOS Primavera Sound and NOS em D’Bandada in Porto.

In Porto and the North region, Vodafone Paredes de Coura on the river beach at Taboão is a good example of a heavenly setting in the midst of nature. Bike rides, trekking, canoeing and river bathing are just a few of the suggestions that can perfectly complement a few truly well spent days. In the centre of the country, near Tomar, the Bons Sons Festival shows how a village can be mobilised to organise an event that offers the best of Portuguese music and traditions.

On the coast, the concerts combine with the beaches, friendly people and nights that last until the next day dawns. The famous MEO Sudoeste festivals in Zambujeira do Mar and Músicas do Mundo (World Music) in Sines, the Sumol Summer Fest in Ericeira or the RFM Somnii in Figueira da Foz are near the beach with everything that’s good about it. It is an excellent time to take the plunge and have some surf lessons in the best spots on the Portuguese coast.

In Funchal, the NOS Summer Opening unites music with nature to provide experiences the enable you to discover Madeira with plenty of adrenaline. In the Algarve, the Festival Med in Loulé and the Festival F in Faro transform the historic centres of the cities into stages for various artistic events.

Those who go for classical or jazz sounds can opt for the Festival Terras sem sombra (in English, ‘lands without shade’) in Alentejo, where classical music concerts invade churches and convents and are beefed up with programmes that showcase local activities and traditions. For jazz, go for Angrajazz, which takes place every year in October on Terceira Island, in the Azores.


From shows, featuring big names to important events in the international calendar there will always be a programme somewhere in the country that will suit you. Nothing like checking the schedule to see who will be here and then ... just follow the melody!