Last 6th of  March on ITB Berlim 2019, Qatar Airways announced new direct flights from Doha to Lisbon starting on the 24th of June 2019, with a daily service with Boeing 787 aircraft:

Doha – Lisbon
Service operates 5 weekly in winter season, instead of 7 in summer.

Schedules listed below is effective for the week of 01 JUL 19 only, as operational schedule varies: 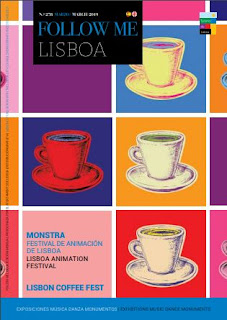 Before you visit Lisbon, check "Follow me Lisboa" and discover what´s happening in the Lisboa region during the month of March. "Follow Me Lisboa" is a monthly tourist Guide for visitors.

A bilingual guide in Spanish/English, and in Portuguese/French, it is a pocket-sized publication containing the main cultural and other events to interest to the tourist and a complete itinerary to museums, monuments, parks, gardens, hotels and restaurants.

Find more about Lisboa region at:
- https://www.visitportugal.com/DiscoveringLisbon
- http://www.visitlisboa.com/
- Brochure "Lisbon City Breaks"
- Brochure Lisbon: " A whole world to explore"
- 10 things to do and to see in Lisbon
Posted by VisitPortugal at 10:33 No comments: Links to this post

Porto Airport was one of the airports distinguished from ACI – Airports Council International, from among its peers, winning a very significant prize: best European airport in 2018, in the 5-15 million passenger category.

The award is given as part of the Airport ServiceQuality Survey (ASQ), the world-leading benchmarking programme in the Passenger Satisfaction Assessment – 2018 Airport Service Quality Survey (ASQ) Awards. The findings of the study are based on questionnaires filled in by passengers who, by doing so, express their opinions on 34 indicators relating to the services offered by airports: the quality of the services, waiting times, courtesy of staff, cleanliness of the facilities and comfort.
In 2017, the Francisco Sá Carneiro Airport, which is managed by ANA/VINCI Airports, was voted second best in Europe in the over two million passengers a year category. Boasting excellent accessibility, the airport offers exemplary service and direct flights to 79 cities.


"We were proud to learn that we had once again been chosen by our passengers as one of Europe's best airports. This is our 13th award in the last 13 years, consolidating Porto Airport as offering the highest levels of international excellence. This is a sign of ANA network's successive investments in an ongoing effort to continuously improve the quality of our passenger service.In 2018, our passenger numbers rose to 11.9 million, a year-on-year growth of 10.7%," said Thierry Ligonnière, Chief Executive Officer of ANA Aeroportos de Portugal.

The ACI – Airports Council International is the only worldwide professional association of airport operators. ACI Europe accounts for more than 646 members who operate 1960 airports in 176 countries. Since its instigation in 2006, the ACI/ASQ Survey has become the world-leading benchmark in airport passenger satisfaction, with more than 388 participating airports in 91 countries. Its scientific methodology, rigorous quality control procedures and commitment to impartiality have earned it the recognition of the sector and established the ASQ Survey as the global standard for measuring passenger satisfaction in 47 languages.

The ACI monitors the participating airports regularly to ensure compliance and to validate the findings.

Source: Ana - Aeroportos de Portugal
Posted by VisitPortugal at 17:57 No comments: Links to this post 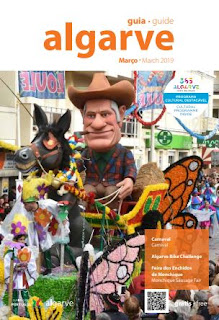 Going to the Algarve during the month of March? So discover here what’s happening in the Algarve region.

The Algarve is known for its beaches, natural landscapes, bars and golf courses. And for its restaurants, hotels, monuments, and of course, for entertainment.
The offer of entertainment destination is diversified and includes events of public and private partners that invite you to enjoy emotions and traditions, sounds and regional flavors, that the Algarve Tourism organizes in this guide leaflet.