It´s starts today the Regatta of Portugal: May 30 to June 2, Lisbon 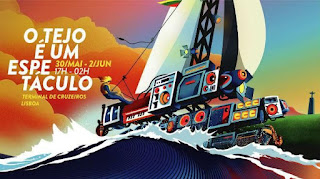 The Regatta of Portugal is back for another edition and will transform the Tagus into a great spectacle aboard the fast and agile trimarans Diam 24, the iconic boats of the "Tour de France à la Voile" competition.

National and international sailors will compete daily from 5:00 p.m., ending at sunset, always accompanied by good music and lots of animation, from the floating stage.
Get ready because the party won't stop.


Every day, after sunset, it will be time to celebrate the Popular Saints in the one that promises to be the best "Arraial" of the River Tagus.

Posted by VisitPortugal at 16:30 No comments: Links to this post

The Douro historical train returns between June and October 2019

Travelling on the Douro Historical Train is like travelling back in time.

In a route along the Douro River, the steam locomotive and the five historical carriages run the distance between Régua and Tua, on a unique trip to the past through the beautiful landscape, which is classified by UNESCO as World Heritage.

Programme
One-day programme leaving Régua at 15:23 and returning at 18:32 with a stop at Pinhão, and then on to Tua and back. On-board entertainment with regional singers and musicians and a toast with a glass of Porto Ferreira. You can also try the Régua candies, a tradition for those who visit this region of Portugal.
You can just buy the Douro Historical Train journey, or you can choose to buy a Combined Package, which includes a return trip from anywhere in the country on Alfa Pendular, Intercidades, Regional and Oporto urban trains.
+ info: http://bit.ly/2KccHXf
Dates and times for the 2019 edition:
- Saturdays, between June 1 and October 26, 2019;
- Thursday (public holiday), August 15, 2019.
Outward: Régua 15:23 > Tua 16:34;
Return: Tua 17:10 > Régua 18:32.

- Packs (Historical train + journeys all over the country – return) : Please check the prices on the CP website here.

Posted by VisitPortugal at 14:55 No comments: Links to this post

Any plans for the weekend? We'll help you: go to Porto and attend Serralves em Festa 2019

From May 31 to June 2,  visit Porto and take part in one of the biggest contemporary arts festivals, that offers activities for all ages and for the whole family.

The festivities aren’t confined to the premises of Serralves - they extend beyond the Foundation’s walls and inundate the streets of Oporto’s Baixa zone with street theatre, music and lively entertainment.

Posted by VisitPortugal at 14:19 No comments: Links to this post 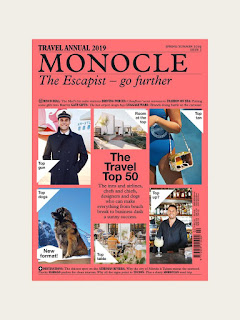 Source: Monocle
Posted by VisitPortugal at 15:43 No comments: Links to this post

Portugal has been nominated once again for the Europe event of the world travel awards 2019 with 143 nominations in almost 70 different categories categories.

The WTA are considered the "Oscars" from the tourism industry and Portugal has over the past few years won for multiples times. 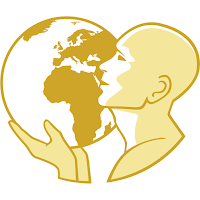 The winners will be announced on the night of the Europe Gala Ceremony 2019 that will take place in Funchal, Madeira Island, Portugal , on Saturday 8th June 2019, in Belmond Reid’s Palace.

For the Europe event of the WTA, Portugal has several nominations and you can check the full list here.

Source:
WTA
Posted by VisitPortugal at 16:28 No comments: Links to this post

Madeira Tourist Board will welcome hundreds of industry leaders to the red-carpet event, on 8th June 2019, when Madeira will celebrate one of its major events, The Atlantic Festival, which marks the start of Madeira’s summer season.

The WTA ceremony will be held at the famous Belmond Reid’s Palace, a breath-taking island retreat overlooking the Atlantic Ocean.

“It is an extraordinary and unprecedented opportunity to promote Madeira, as well as to optimize its tourism potential abroad.”, said the Regional Secretary for Tourism and Culture, Mrs. Paula Cabaço.


About Madeira:
Madeira, otherwise known as ‘the islands of eternal spring’ is just a short flight from most European cities.

It is 741 square km in size and has a population of 254K. On the same latitude as Morocco, the Atlantic archipelago has a sub-tropical climate and rich volcanic soil. Madeira has a unique eco-system and is one of the only places in the planet where banana trees grow next to vineyards.

In 1999 the archipelago was named A UNESCO World Heritage Site and five areas have been declared nature reserves. The Madeira Nature Reserve covers a substantial 77% of the main island, where development is prohibited.

About World Travel Awards
WTA was established in 1993 to acknowledge, reward and celebrate excellence across all sectors of the tourism industry.

Today, the WTA brand is recognised globally as the ultimate hallmark of quality, with winners setting the benchmark to which all others aspire.

Each year, WTA covers the globe with a series of regional gala ceremonies staged to recognise and celebrate individual and collective success within each key geographical region.

WTA gala ceremonies are widely regarded as the best networking opportunities in the travel industry, attended by government and industry leaders, luminaries and international print and broadcast media.

Source:
World Travel Awards, Madeira All Year and VisitMadeira
Posted by VisitPortugal at 16:00 No comments: Links to this post

Lisbon to host first Global Exploration Summit to be held outside of USA, in July

Portugal will host the summit of the oldest exploration society in the world, the Explorers Club of New York. It's the Global Exploration Summit (GLEx), which will take place from 3rd to 5th July in Lisbon.


Celebrating 500 years of the first Magalhães / Elcano circumnavigation yoyage, this summit will be attended by 400 pioneering researchers and professionals in the field of science, art and technology, who will take part in the signing of the Lisbon Resolution.
The event, which will be organised with the support of Turismo de Portugal and in collaboration with Estrutura de Missão for the celebration of the circumnavigation's 500th anniversary, should have panels open to the public with worldwide references to exploration and science.
The announcement of this summit coming to Portugal was made by Secretary of State for Tourism, Ana Mendes Godinho, at the annual The Explorers Club gala held in New York last March 16th. This ceremony celebrated the 50th anniversary of the arrival of the Man to the Moon, with a tribute to ten living astronauts  from NASA's various Apollo missions, to which Portugal offered a bottle of Port wine dating back to 1969.
The Explorers Club was founded in 1904 and has 3,500 members, including names such as Elon Musk (Tesla and Space X), James Cameron (filmmaker) and Jeff Bezos (Amazon).
Among the confirmed speakers are the World Ocean Forum’s director Alexander More, the doctor Bertrand Piccard, the archaeologist Beverly Goodman, the film director Fabien Cousteau and NASA’s chief-scientist James Garvin.
A second Portuguese edition of the event is already planned for 2021.
Posted by VisitPortugal at 15:43 No comments: Links to this post 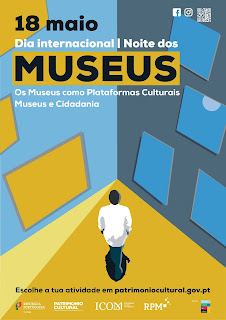 On 18 May, Portuguese museums will be commemorating International Museum Day and Nightof Museums with a varied programme of activities throughout the day that are well worth taking advantage of.

In a society subject to constant change, museums are cultural platforms which, in addition to their mission of collecting, preserving, communicating, researching and exhibiting, should offer visitors the chance to create, share and interact. One way or another, they have become a reflection of the local needs and opinions of the people for a global context.

On Museum Day, which this year falls on a Saturday, a great many activities will be organized. They include guided tours, historical re-enactments, performances and shows which will be extended into the Night of Museums, to provide a visit experience with a difference, outside the usual hours.

Posted by VisitPortugal at 12:28 No comments: Links to this post

From 31 May to 2 June, don´t miss the Iberian nature festival ObservArribas 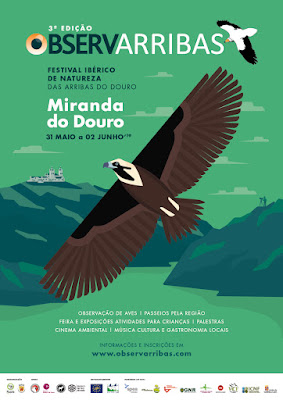 From 31 May to 2 June, binoculars and cameras will once again descend on the streets of Miranda do Douro, in northeast Portugal, for Iberian nature festival ObservArribas. Over the course of three days, hundreds of birdwatchers and nature-lovers will come and explore the Douro region’s birds, views and traditions.

From watching eagles and vultures – Europe’s largest birds – to searching for birds at night-time, tasting local cuisine or joining in a traditional dance, ObservArribas caters to all tastes. Visitors will have a chance to explore the region on foot, by boat and even in an electric car – a novelty this year. Now in its third edition, the festival is moving to the centre of town.

Right next to the castle walls will sit a veritable nature fair, featuring local products and a screening of environment-themed films. And as the festival spans International Child’s Day, there will be no shortage of activities for young explorers. 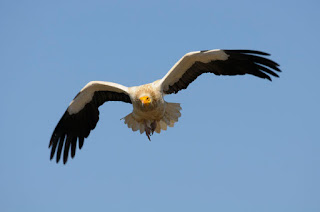 “Right from the start, Life Rupis was always predicated on the idea that local development and nature conservation should be allies. This region’s culture has been shaped by nature: by the river, by the climate. So in this third edition we brought ObservArribas to the centre of town, so that even people who don’t go on a hike or join a birdwatching session can feel that connection between the region’s nature and its people,” says Joaquim Teodósio, who coordinates SPEA’s Land Conservation Department and the Life Rupis Project.

The festival’s stars will be the region’s birds, which visitors will get to see from every possible angle: in daytime and night-time; in the city, on the cliffs and from the river itself. And if you wish to see nature through the eyes of those who depend on it, you can join a local shepherd on his rounds. 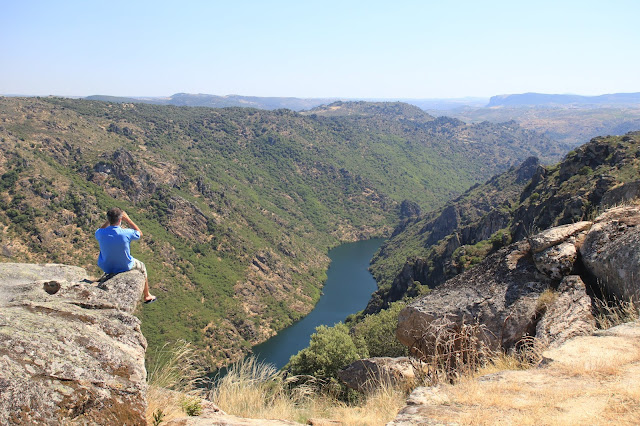 In the centre of Miranda do Douro, young and old will be able to get down to business: grown-ups can use beeswax to make plastic-free clingfilm, while youngsters reuse everyday things to make binoculars. And all can be enthralled by the “CSI dogs” demonstrating their work with the National Guard’s nature protection service.

With dozens of activities throughout the region – in Portugal and Spain – ObservArribas is an invitation to explore the natural and cultural heritage of the Douro canyon.

Posted by VisitPortugal at 15:20 No comments: Links to this post

“It is a great honor for Lisbon airport to receive this recognition. Lisbon is an amazing city that grew incredibly in recent years, and the airport has been responding to airline and passenger expectations and coping with this fast growth that brought great challenges.”

The Air Transport Awards recognize and honor the quality and the commitment of the organizations as well as individuals of the aviation sector.

This award recognizes the excellence of the airport’s teams committed to the quality of service of the airport as well as VINCI Airports’ commitment to contribute to the development of the Portuguese economy by building traffic and investing in infrastructure to support its growth.

Source: Vinci Airports
Posted by VisitPortugal at 11:11 No comments: Links to this post

From the 2nd of May to the 17th of July, don´t miss Lisbon Under Stars

From the 2nd of May to the 17th of July, Lisbon Under Stars will take you on an immersive journey through history that brings together multimedia projections, virtual dancers, visual effects and music. 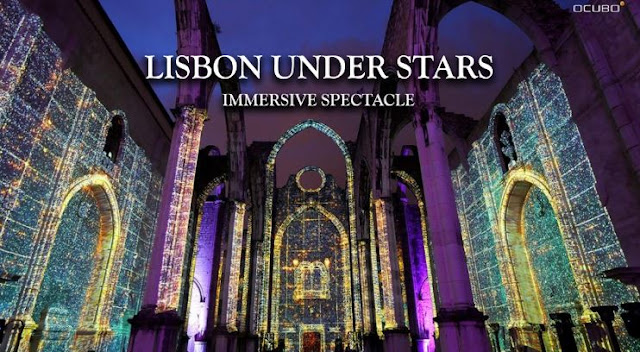 The ruins at Carmo, in Lisbon historic center, will be transformed into a time machine and its wall into a three-dimensional and 360º screen onto which more than 600 years of the history of the city of Lisboa will be projected.
Lisbon Under Stars will take you on an immersive journey through history that brings together multimedia projections, virtual dancers, visual effects and music.
It also involves many of the biggest names of Portuguese music, culture and dance.
This is the second edition of this event that in 2018 won the BEA Best Cultural Event award.
Dates:
From 2nd May to 17th July, Monday to Saturday at 9:30 pm and 10:45 pmLocation:
Ruínas do Carmo, Largo do Carmo (metro: Baixa-Chiado)Tickets: 15 euros, general; 12 euros, children from 6 to 10 years, students, over 65 years old
Find more information at:
- https://www.lisbonunderstars.com/
- https://www.visitlisboa.com/node/8926
- https://www.museuarqueologicodocarmo.pt/index.html

Source. visitlisboa.com
Posted by VisitPortugal at 10:34 No comments: Links to this post