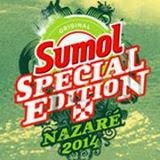 The 6th edition of the most expected Bodyboard championship in Portugal is coming and the dates to the waiting period and to the Special Trials are already known!

In January 2014, Praia do Norte, in Nazaré, Portugal, receives 24 of the best national and international bodyboard athletes, who every two years defy the perfect waves of the “Nazaré Canyon“.

The Sumol Nazaré Special Edition 2014 has a waiting period of almost a month – January 3 to 30 and will be approved by the Portuguese Surfing Federation and the Portuguese Bodyboard Association.

During this interval one day will be chosen to hold the event, according to the best forecasted tides and weather conditions.
This project aims to make known the quality and diversity of these waves and the potential of Nazaré as a unique spot to practice this kind of sport. In ten years of existence (translated into 5 editions held), the Sumol Nazaré Special Edition 2014 attracted to the North Beach more than 50, national and international, top athletes and 15 thousand visitors, under a single event that happens in one day and have innovative molds in the sport’s scene.

In 2012, Pierre Louis Costes was the winner of the 5th edition of the SUMOL NAZARÉ SPECIAL EDITION, being the second and third positions won by the Portuguese António Cardoso and Tiago Moita Silva, respectively.