Explore the Route of Vale do Lima Giants 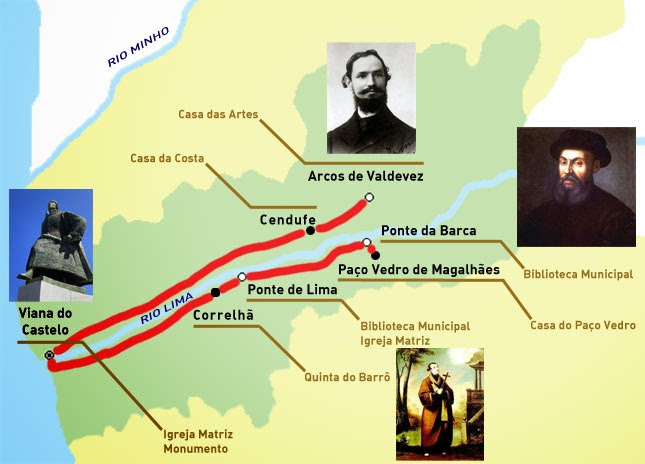 Ponte da Barca:The Navigator, Fernão de Magalhães, lived between ~1480 and 1521, with origins in Ponte da Barca, organized and led several expeditions. He commanded the first trip circumnavigating the planet, proving that the earth is round.

Ponte de Lima:The Saint, Beato Francisco Pacheco, lived between 1566 and 1626, born in Ponte de Lima, he died a martyr in Nagasaki in Japan. Messenger of the Society of Jesus, he was one of the first Jesuit missionaries in Japan.

Viana do Castelo: The Discoverer, João Alvares Fagundes, lived from ~1460 to 1525, illustrious figure of Viana do Castelo, he was knighted the Royal House of D. Manuel I. He explored and discovered Terra Nova in the North Atlantic, an important fishing area for cod.

Arcos de Valdevez :
The Inventor, Padre Himalaya, invented the Pyreliophorus, the himalaite and performed scientific studies related to renewable energy. He lived from 1868 to 1933, born in Arcos de Valdevez, participated in the Universal Exposition in St. Louis.

Find more about at:
http://www.valedolima.com/
Posted by VisitPortugal at 15:27