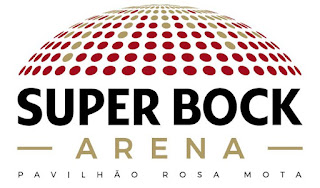 One of Porto most cherished and iconic buildings, the Pavilhão Rosa Mota,  situated in the Gardens of Palácio de Cristal reopened its doors under the name of Super Bock Arena, last 31st of October.

The new Super Bock Arena was entirely refurbished to serve the new city's demands of hosting large cultural, sportive or business events for up to eight thousand people.This venue will become a new cultural hub for Porto, with its proximity to some of the city’s most famous landmarks, restaurants and shops and its great transport links and accommodation options.

Although the building remains "old", in the sense that it will have the same appearance, and the 768 eyepieces that make up the building dome exterior - a brand image - were kept, so as to preserve the exterior architectural identity. The refurbishment has been sensitive to the historic architecture of the building, with the addition of a new state-of-the-art congress center, featuring a 500-seat amphitheater, four function rooms and an exhibition area. Also, the arena will host visits to the dome, offering visitors the opportunity to enjoy the magnificent 360 degree view of the city of Porto and the river Douro.

The Super Bock Arena - Rosa Mota Pavilion has also planned a restaurant with a view to the lake and to the Gardens of Palácio de Cristal, whose opening is scheduled for the first semester of 2020, with a 300 square meter area and an esplanade with 400 square meters. There will also be a food court on the Ground Floor.
The original building dates back to 1865 and called as "The Crystal Palace". It was designed by the English architect, Thomas Dillen Jones, inspired by Crystal Palace in London. The building was designed as a granite, iron and glass structure to host the Porto International Exhibition at that time. But unfortunately, over the years, the building fell into disrepair, leading to its demolition in 1951 when it was replaced by the current sports pavilion Rosa Mota. Now, the new Super Bock Arena has been re-engineered to become a modern and flexible venue capable of hosting a multitude of events and will support the growth of leisure and business tourism in Porto.